Until The Day After Forever

I'm back from my blogging vacation! Wow, when did September become the busiest month of the year? Not only am I back to school (teaching Grade 3), but I've had our youngest daughter's wedding and a trailer rally too. So today's post is about the wedding! Such a gorgeous September day at Pictou Lodge overlooking the Northumberland Straight. Just as we were being seated there were seagulls swooping along the water, but as soon as the ceremony began they flew away. It was as if they knew they were not on the guest list.. 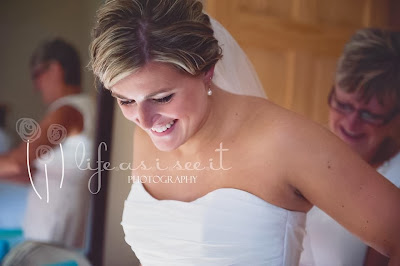 This  is a picture of me lacing up the back of  the bride's dress.
Here's a shot of the ceremony. They were literally four feet from the edge of that cliff. I was fine until the photographer got up on a stepstool and then I was nervous thinking one wrong move and someone was going to end up in the ocean, lol. 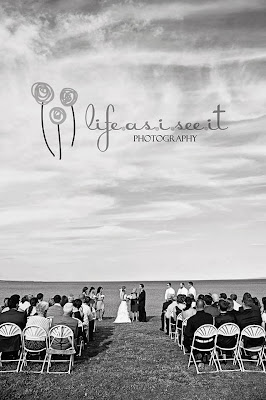 Jill had chosen coral and turquoise as her "colours". It just so happened that the Lodge had bicycles that fit her colour scheme. 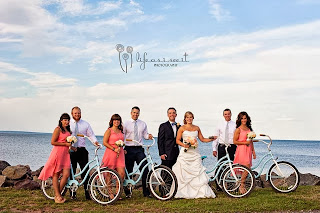 After the reception, they hosted a beach bonfire very close to where this shot was taken. It was a fun (but very busy) weekend. Congratulations, Mr. And Mrs. David Williamson!
Posted by Beth at 14:39

Email ThisBlogThis!Share to TwitterShare to FacebookShare to Pinterest
Labels: weddings

Your comments are valued. I read every one of them. (In fact I often go back and reread them.) They really do make my day! Thanks for taking the time out of your busy day to write to me.

A fun group of women who love campers and camping!

Betty was a Cover Girl at...

Beth
Nova Scotia, Canada
Just a 2 X 30 year old wife, mother, teacher. I have a wonderful husband who has been my best friend since he first took me out on Friday the 13th a little over 30 years ago. We have two grown daughters. I teach grade 4 but this is my last year. I plan to retire at the end of this school year. What will I blog about? A little bit of everything, but mostly about "Betty" (my vintage trailer), our cottage, and some DIY projects. Blog lurkers welcome; it took me a long while before I got to this point. Thanks for reading. Happy travels to you!