When I first became interested in vintage trailers, I was intrigued by the magazine racks that many vintage Shasta models have. So when I "toured" my trailer and noticed it also had a magazine rack, I was smitten! I'm not sure it is authentic. The previous owner was quite a DIYer so he may have just modeled mine after one he had seen on a Shasta. But that's ok, I still think it adds some vintage charm. Instead of the large "S" found on Shastas, mine sports a "G". I painted it Blue Ocean Breeze with Krylon spray paint. That little match holder sitting on the counter is painted that shade too. 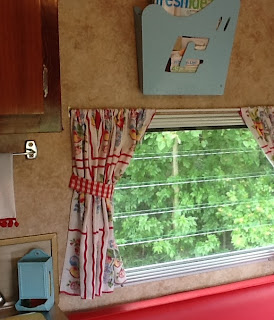 Your comments are valued. I read every one of them. (In fact I often go back and reread them.) They really do make my day! Thanks for taking the time out of your busy day to write to me.

A fun group of women who love campers and camping!

Betty was a Cover Girl at...

Beth
Nova Scotia, Canada
Just a 2 X 30 year old wife, mother, teacher. I have a wonderful husband who has been my best friend since he first took me out on Friday the 13th a little over 30 years ago. We have two grown daughters. I teach grade 4 but this is my last year. I plan to retire at the end of this school year. What will I blog about? A little bit of everything, but mostly about "Betty" (my vintage trailer), our cottage, and some DIY projects. Blog lurkers welcome; it took me a long while before I got to this point. Thanks for reading. Happy travels to you!